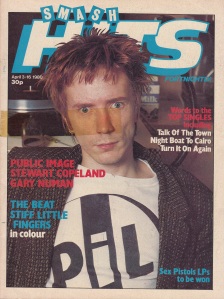 For 30p, you get PIL’s Johnny Rotten on the cover!  Lyrics to “No One Driving” by John Foxx!  Generation X split!  A neat photo of fanatical historian Pete Frame (“Rock Family Trees”)!  “January February” by Barbara Dickson gets it’s lyrics printed!  (Funny, there used to be a badge on the cover of this magazine, no doubt long ago assimilated into the larger button collection of the day).

The Slits – “In The Beginning There Was Rhythm” (Y Records)

XTC – “Wait Till Your Boat Goes Down” (Virgin Records)

I didn’t know what to make of Josef K at the time, but in 2013 I think they’re pretty ‘ace’.  I liked the Island Records titles by The Slits better than all that came after ‘em.  Sign me up for all the 45’s from The Buggles album!  I remember reading that this XTC 45 was the one that Andy Partridge was proudest of – yet, it never ended up on a proper LP at the time.  I had (and have) time for Pete Townshend; this wasn’t a bad 45, but I liked the album “Empty Glass” LP even better.  And this was a great Madness EP, I remember really liking it, and delighting in finding a 12” of it from…Italy?  (The UK EP was only ever a 7”, that I am aware of).

The 3rd Motors’ album was not charmed; they finished up shortly thereafter.  I doubt the “American Gigolo” soundtrack LP is memorable; people were infinitely more concerned with “Call Me” by Blondie, which was in the film, but not on said LP.  Ah, the concerns of the 1980 British music business!

I did get to see Athletico Spizz 80 play live at The Whisky A-Go-Go in Hollywood; they were great, and nice guys.  For some reason, I didn’t get any autographs…or did I?