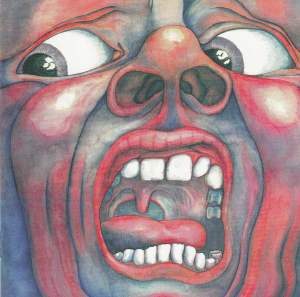 So, how do we arrive at King Crimson?  More specifically, how did they think of “21st Century Schizoid Man” and “Pictures From A City”?

Mr, Fripp really liked British jazz – he even pinched an album title from a British jazz record (“Starless and Bible Black”) by Stan Tracey, a British jazz pianist.  My guess is that the heavy music on the two aforementioned songs at least partially derives from other heavy music of the day, band like Atomic Rooster (themselves deriving from the Crazy World of Arthur Brown), Rare Bird (K.C. later inherited a post-RB drummer, Andrew McCulloch), or possible even the fore-runners of Uriah Heep or Black Sabbath (Spice and Earth, respectively).  What else was ‘heavy’ in England, pre-’69?

Maybe it’s just me, but I’ve always heard a bit of East of Eden in K.C.’s works – and they were a label mate with Giles, Giles & Fripp!  And what of Love Sculpture?  Super fast (Dave Edmunds) guitar playing, esoteric choices of what material to cover etc.  Now they were pre-’69 and reasonably ‘heavy’!

If we examine Giles, Giles & Fripp a bit further – they also seemed to enjoy a spot of “messing about” – a la The Goon Show.  Musically, GG&F are somewhat obviously influenced by UK pop music of the day (1968), with a touch of jazz – and some obvious influence by Mr. Fripp’s guitar teacher; and somewhat obviously “the blues”.  It was what sold so many LP’s in England at that time, it would’ve been impossible for them to not have been influenced by “the blues”.

Please do not under-estimate the influence of British jazz on King Crimson.  Mel Collins came from a band called Circus (on Transatlantic Records), Gordon Haskell came from an introspective solo career (ever hear “Sail In My Boat”?) and John Wetton eventually came from both Family and Mogul Thrash (another Colosseum ‘wannabe’).

Scrape off more skin, and we’ll see King Crimson being influenced by Donovan (they used to play “Get Thy Bearings”); Fairport Convention (Judy Dyble sang for Giles, Giles & Fripp – or was it already K.C. by that time?); Soft Machine – they must’ve bumped into each other?  The Soft Machine – ditto.  The aforementioned Arthur Brown!

Needless to say, my life somewhat changed on the day I first took home a King Crimson LP.  Yes, it was their debut album – and thank Christ I heard all of the original King Crimson albums in the order that they were released.

As a young man, I did see King Crimson perform live – on the back of their “Larks’ Tongues In Aspic” album.  Fuck!  How could I be anyone other than who I am now?  My mirror was dipped into that water, and thereafter – all were judged by what I witnessed as a 15-year-old.

Of course, back in the real world – nobody else at school had ever heard of King Crimson.  They were busy listening to “Frampton Comes Alive” or “Bohemian Rhapsody”.  WTF!  (This brings me back to my high school girlfriend, Rose – yow!  That was amazing!  Fucking in a closet at school etc.  Rose, I still love you.   If you’re reading this, give me a call sometime.  (Refined gentleman of 54 years making this statement; all others – please mind your manners.)

If you didn’t have the same experience as I did, you’re either a different age or (haven’t had as much as I have had to drink tonight).  IPA from Beachwood BBQ in Long Beach, CA – a whole fucking growler of it – by myself.  And there’s a lg. bottle of some other IPA in the fridge, I think.

What a path!  We were talking about King Crimson – and now I’m pining for my high school GF.