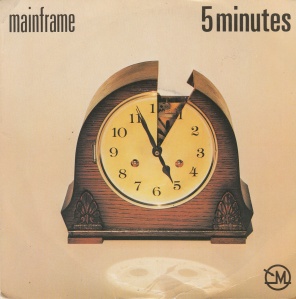 Unless I have my dates wrong, today is my 15th anniversary with Dorothy!        Happy birthday, Marty Balin (of The Jefferson Airplane), born 1945.  The Beatles play their rooftop concert, in London, 1969.

This English band was recommended to me by Hemen Pathak (of the noise band Nurse With Wound) – I think he was impressed that they’d made a record with just the CMI Fairlight keyboard – which was a new and interesting piece of studio equipment in the mid-80’s.  I really liked the “5 Minutes” 12” single and I eagerly awaited the LP – after all, they were on a major label, Polydor Records, England.

For whatever reason, their LP was not forthcoming.  After several years, I found a remixed 12” version of “5 Minutes”: “5 Minutes On”.

A groovy record collector friend of mine, David Overstreet, hipped me to their 1983 LP, “Tenants Of the Lattice Work” – on a tiny private label in England.  The LP contained an advertisement for a competition; something about searching the LP & it’s contents for clues, a large prize etc.  The other 45 that I eventually found, “Talk To Me”, pertains to this LP and not to “5 Minutes” – this 45 actually contained “computer programs” (What? For your Commodore 64?)

I’ve written about Mainframe before, but not lately.  The last time I wrote about Mainframe, I believe I was contacted by John Molloy, who now lives in the US.  No, there wasn’t ever a Polydor LP.  Shucks!

Recently, I chanced across a 7” 45rpm single of “5 Minutes” – it’s actually quite a different version to either 12” single!  Amazing!  And there’s still no LP getting re-released onto CD…

For me, Mainframe are one of the great unfulfilled promises of 80’s British pop music.  John, if you’re reading this, please tell me again why there wasn’t ever an LP to go with “5 Minutes”?  Did the UK music industry just move so damned fast that – Fairlight bands were out of favor in such a short span of time back then?