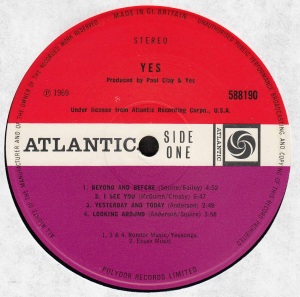 This is turning into “Birthday Week” around here!

I am never really certain who is in or out of Yes at any given time.  In order to get Asia, do you have to add John Wetton?  Yes member solo careers:  I can name at least 2 Jon Anderson solo albums!  Well, I could probably also name 1 x solo album by Chris Squire, maybe 2 x Steve Howe solo albums…and Rick Wakeman doesn’t count (“I know Mudhead, but only to 10”), as he has zillions of solo albums – but how many of them are attributable to his membership in the Yes club?  Yes Club 7!  And we all have an Alan White solo album somewhere in the “W” section of our dusty record collections – don’t we?

I’ve actually seen a few permutations of Yes on stage – and maybe even a solo Jon Anderson concert (or two?).  Really, I don’t mind this stuff!  Best show (that I can still recall) was Anderson at The Roxy, fronting a bunch of children who had learned the overly-complicated Yes licks at some ‘band camp’ (or school).

“Olias Of Sunhillow”, the debut Jon Anderson solo album – certainly had lovely packaging; Nicely printed, with an extra fold, I believe.  It certainly had custom labels.  Always firmly a believer that in order to get “Yes” – you must have at least 3 members of the band present.  Can’t remember how many members of Yes are on “Olias of Sunhillow”, as I sit here typing this.  I went and checked, and the $1 LP of it that I found isn’t filed in either “A” or “Yes”, so it must be in a box somewhere here.

I was among the curious when Trevor Horn of The Buggles replaced Jon Anderson in Yes.  But I will confess that I welcomed Jon Anderson back, for “90125” (original title: “80123”, when it retailed for a dollar less!).  “Big Generator” was also always a bone of contention, at least among the set of Yes fan that I ran with.  Some hated it, others loved it.  It sounded like “Sides 3 & 4” of “90125” to me.  When the yes albums got re-mastered recently, I don’t think Rhino bothered with “Big Generator”, but Warner Japan certainly did!  (Crisp new CD mastering, SHM-CD and bonus tracks!)

Yes members (past and present) must occasionally wonder what happened to the music industry they once knew.  Where’d the suits go who approved our artwork?  Why can’t we make an album that you could buy virtually anywhere in 2012?  How come we only tour Japan now?

So, Happy Birthday, Jon Anderson – the voice of Yes.  Some of the fans still fondly remember when Yes took over that theatre in San Luis Obispo.  Probably, there are fans there waiting for that to happen a second time.  Remember when Jon Anderson played Mongo’s Saloon in Grover Beach?  (Sorry to alienate non-Central California residents, with this idle chat about S.L.O. etc.)