March marches on – and I continue to work on my “Music Video Project”.  Towards the end of February 2012, I originated a new 59 minute volume:

Of course, we deal with the ephemeral nature of music most clearly with this volume.

As far as I know, all videos are stereo, and reasonably good masters.  The Soft Cell titles came from a Japanese laser disc, dubbed many years ago.  The Bill Wyman videos – which were just a little too outré for MTV – were sold as a Sony “Video 45” – in stereo hi-fi (Beta)!  The Fall came off of some sort of VHS-dubbed-to-Beta demo reel of “alt” bands – I think I kept it because I realized how unusual a 7 minute version of “Cruiser’s Creek” was.  I’m pretty sure the Art of Noise clips came from ¾” U-matic videocassettes that were dubbed to Beta.

Bill Wyman never made music videos again, as far as I know.  He continued to make albums, but…not ‘pop songs’ with music videos, per se.  When I mentioned Bill Wyman to Jim D., he had an amusing paraphrasing from Trouser Press magazine, panning “A New Fashion”, which I rather enjoy!  When was the last time I had to consider Bill Wyman?

And I do believe that the Soft Cell clips are what were serviced as clips, and not just things chopped out of “Non Stop Exotic Video Show” – the first time I ran across “Bedsitter” in my music video collection, I am almost 100% certain it was from ‘film’ – the one here is on videotape! 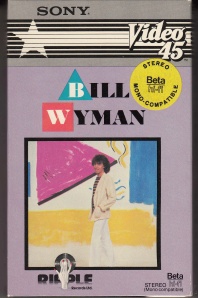