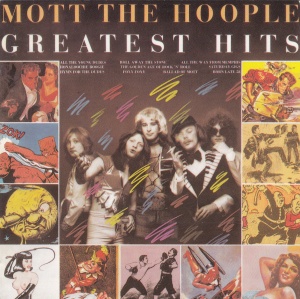 Can you say transmogrification?  How did Mott The Hoople become David Bowie?  Of no matter – but it clearly saved their collective bacon!

Ah, the glam rock era of Mott The Hoople!

And all of this leads to a solo career for Ian Hunter, of course.  Mick Ralphs eventually found favor in Bad Company.  Morgan Fisher moved to Japan, after performing as The Hybrid Kids.

And the MTH crew rocked on…always overlooked – Ian Hunter probably gets more than his share of the credit for the initial successes of Mott The Hoople, but – they really were a band!  And I know they all worked very hard.

Frankly, I am surprised that they never get compared to the Rolling Stones of their era.