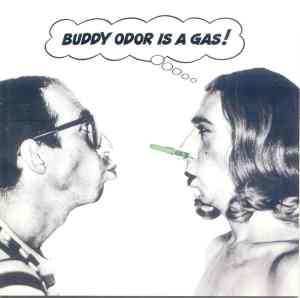 For the 4th title in My Ultimate Collection, the 3rd album by Gruppo Sportivo, “The Buddy Odor Stop – Buddy Odor Is A Gas” (1979) is an obvious choice.  I acquainted myself with Gruppo Sportivo at the time of their debut album, merely because I could see Robert-Jan Stips’ name on the cover (as producer).  I had been a huge Supersister fan for most of the 70’s.

If I choose the original LP of The Buddy Odor Stop, it’s a glorious original Dutch pressing, with custom labels, a heavy inner-sleeve and a sticker included.  If it’s the CD re-issue, it includes an additional album, the original Dutch version of their debut, “10 Mistakes” (1977) – so I will be going with the CD issue (but I will also probably keep one of the several versions of the Buddy Odor Stop LP that I already own) – “10 Mistakes” is great, too – but this entry is just for “Buddy Odor Is A Gas”.

If you’re familiar with Gruppo Sportivo, you already know about their fun and clever English-language pop music from The Hague in The Netherlands.  GS main-man Hans Vandenburg came from the Leo Unger group.  Yes, I went to the trouble to seek out “Run To The Sunshine” (1974) by Leo Unger, just to see what Hans Vandenburg looked like, pre-Sportivo!

I started visiting Holland in 1979.  Even on that first visit, I made the journey to Aad Link’s office in The Hague, “Rock In Waterland” (Trekweg 8!).  I visited Holland many times between 1979 and 1992, and Aad was always very nice to me, finding me stuff from the groups he worked with: Supersister, Gruppo Sportivo, The Nits…I was once given a bunch of Gruppo Sportivo posters – which I promptly lost while riding the trains around northern Europe!

So, the pop songs on “The Buddy Odor Stop “ are perfect; perfect Sportivo, perfect pop songs.  I love every one of them; there’s no telling just how deeply engrained this album is in my psychological make-up.  It’s beautiful stuff.  It always made me sad that this album didn’t seem to be very well received at the time of it’s release – no US issue, no big tour…the original group fell apart and Hans re-grouped in 1980 for “Copy Copy” (goodbye Josee and Meike!).

But in my universe, this is one of the best albums of the 1970’s and certainly my favorite album of 1979 – and easily my favorite album from Hans Vandenburg / Gruppo Sportivo.  If I could take this album with me when I leave, it will have been all worth it.  Someone on Earth created the near-perfect pop album – in English, in Holland, in 1979.  Go figure!

I think it is safe to say that My Ultimate Collection cannot be ranked accurately.  I think at some point any title in the “Top 10” has been my favorite record of all time…but I keep listening, and something else gets my attention.  But I most certainly return from time-to-time to pretty much everything that’s near the top of my list. 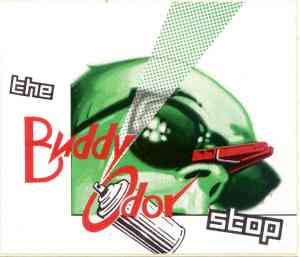